This post ” Radical Economic Theories Are Not the New Normal” is originally from https://economics21.org/radical-economic-theories-are-not-new-normal
2020 04 17 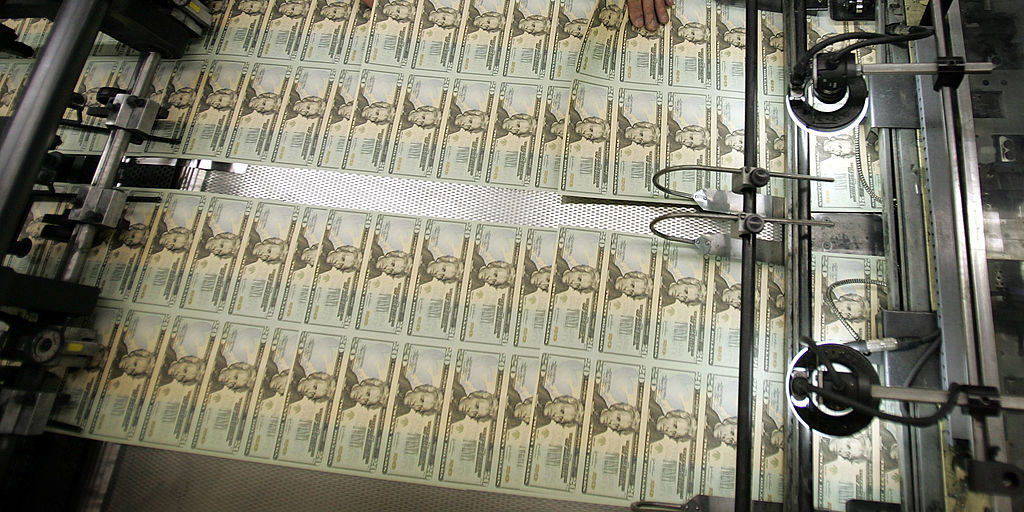 These are extreme, unprecedented times. They call for extreme policies to provide insurance to firms and individuals. The government is printing trillions of dollars to keep businesses afloat and households from going hungry, and the main buyer for all this debt is the Fed. It is sending everyone with incomes below certain thresholds in 2018 checks of up to $1200. It sounds like the day has come for what used to be seen as fringe theories, including Modern Monetary Theory (MMT) and Universal Basic Income (UBI). But this is not what is happening.

Sending everyone a check this week is not UBI. UBI is by definition a consistent paycheck you can count on without doing any work. The checks that went out this week are a one-time payment; perhaps there will be another round, but that is not certain. The government sent the payments because Americans needed money fast, and a more targeted program would have taken too much time when millions of Americans have meager savings and no income and still need to eat and pay rent. The justification for and implementation of UBI depends on who you ask, but reasons usually come down to it frees people to pursue more meaningful work, provides a predictable income floor, or replaces the rest of the safety net. Sending a one-time check is none of those things. It may provide some immediate relief, but future income is still uncertain. True UBI pays out in good times and bad―the consistency is what makes it UBI. Its consistency also causes the concern that UBI will discourage work and encourage dependency on the government. Because the pandemic check is a one-off and we are in the midst of historically high unemployment, the current crop of pandemic checks cannot be taken as evidence that UBI doesn’t discourage work.

Policy in today’s extreme times also does not justify MMT. Defining MMT precisely is difficult because its proponents refuse to describe it in a complete economic model. When mainstream economists ask questions, MMT champions won’t answer them; they always argue that not a single MMT critic understands it. But MMT seems to be the idea that the government can manage the economy by running debt that is paid for with seigniorage, or money straight from the printing press, and never default or experience hyper-inflation.

Running debt with seigniorage is essentially what is happening now. The CARES Act will cost at least $2 trillion, and the Fed plans to buy about $2.5 trillion in debt to provide liquidity to the corporate bond, municipal, mortgage, and treasury markets. But there are some important differences from pure monetization. Interest rates are still set in the market—albeit a distorted one―since treasuries are still sold at auction. The Fed has been explicit they will not continue to buy all this debt once markets stabilize. If the Fed is credible, this isn’t MMT, since markets will still believe eventually all this debt will one day be rolled over and bought by the public.

The validity of any economic theory depends on how it works in different economic conditions, even different types of recessions. It could be argued that MMT is a valuable recession-fighting tool. But that is not what MMT advocates argue. They want seigniorage finance of deficits in good times too. And this is like no other recession. It is hard to argue these extreme conditions—a total global economic shutdown―show that we can monetize debt in more standard recessions.

A popular criticism of MMT is it will cause inflation (MMT advocates claim, implausibly, that any inflationary effects of their preferred policies can be curbed through higher taxes). In the past, almost every country that has tried to monetize its debt has faced higher interest rates and high inflation. The current Fed policy probably won’t, but that should not be seen as validating MMT theory. We won’t have inflation because people are trapped in their homes and out of work and aren’t spending. If the Fed continues to buy all of the Treasury debt when we are in a recovery, it will have a very different impact.

A bigger question is how long this can last. These policies―debt monetization and sending everyone a check―were rationalized based on the idea that this would all be very temporary, maybe only a few months. But it now seems lockdowns will be relaxed very gradually, which will mean a longer, more drawn out recession. A single check or monetizing debt for a few months probably won’t have adverse effects and will probably help the economy. But if these policies become the norm over the next year, they will start to alter both the incentives faced by firms and workers and the way in which the market values sovereign debt.

Interested in real economic insights? Want to stay ahead of the competition? Each weekday morning, e21 delivers a short email that includes e21 exclusive commentaries and the latest market news and updates from Washington. Sign up for the e21 Morning eBrief.